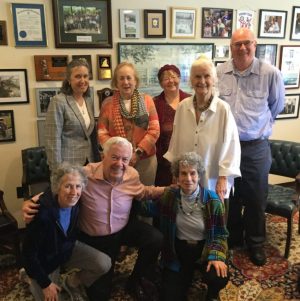 The FIKA meeting in May took a different form – a chat with the billionaire philanthropist Bill Cummings.

The HRF office is located at West Cummings Park in Woburn, MA and, in common with all Cummings Properties buildings, all profits are distributed to charities. Prior to the meeting, all of the participants were given a copy of Bill’s autobiography “Starting Small and Making It Big.” This is a fascinating account of Bill’s life from his schooldays in Medford MA through the founding of his company and its growth to the point where it now owns and rents out over 100 buildings in the Boston area.

If you walk into one of these buildings you will probably see a sign that says, “This Building Powers Charities: 100% of profits go to nonprofits. Bill told the group that he came to the decision to distribute his wealth several years ago after consultation with his family. All of them felt that they had no need for great wealth and would prefer to see it used for the greater good. The Cummings Foundation now makes 100 grants of $100,000 per year to nonprofits in the Boston area, and also funds international projects such as those undertaken by Partners in Health in Africa.

Those attending this FIKA had the opportunity to ask Bill about his life, his work, and the philosophy that drives him. He admitted to being a risk-taker, but stressed that was an essential part of being an entrepreneur . However, he did say that his risks were always taken in the knowledge that the company would not be crippled if a project did not succeed. Although Bill is now 82 he shows no sign of slowing down and admitted to still working for around 10 hours a day. His work now, however, is dedicated to distributing his wealth, and our feeling was that this gave him great joy and satisfaction.

All who attended this special FIKA agreed that we were very lucky to have the opportunity to spend some time talking to Bill. We learned a great deal and were greatly inspired by his desire to share his good fortune.